The day started in the morning mist at 7am as we boarded the first of two trains to Bristol. The only direct train from Brighton to Bristol takes 3.5 hours. There was a severe lack of legroom but magazines and music kept me occupied. Then as we arrived into Westbury, just a couple of stops away from Bristol, we were informed of a signal failure. To get around this the train took us down to Taunton and then back up to Bristol..

Where we should’ve gone..

An hour and a half late we arrived in Bristol. The station is made up of several platforms and some impressive architecture. Our hotel was extremely central and just an 18 minute walk from the station. Within that time we saw several drunk people, people playing ‘chicken’ in the road and two (unfit) security guards chasing a guy down a dual carriageway. Not what I expected when I got up this morning. After dumping our bags at the hotel and loading up the cameras with film we headed out hoping we would see a different side of Bristol. And boy were we wrong to judge it on first impressions.

The centre of town was buzzing with early Christmas shoppers and there was a Christmas market running through the main high street. Even the shopping centres were boasting impressive architecture, the 8 year old Cabot Circus in particular was extremely enjoyable to walk around.

Before we soaked up the atmosphere of the Christmas market we headed down to the harbour before the sun went down. The walkway was lined with busy independent restaurants and cafes. The path led us to the Bordeaux Quay which had an open plaza-like space filled with young skaters attempting to kickflip (the only trick I know) down some very high steps. Inevitably there were some very brave faces as we witnessed at least 10 kids fly through the air and hit the ground with a sobering thud. Incredibly they all got up and gave it another go. The views across the water were beautiful with boats going up and down and joggers taking in the Autumn air along the quay. There were modern apartments surrounding the water providing residents with views I’m extremely jealous of.

Heading back into town we realised how hungry we were after travelling for 6 hours and stopped off for some pasta and a drink, well Diet Coke. The Christmas market was ironically dominated by food stalls. But with our stomachs full we could only manage £5 worth of fudge. The Christmas shopping wasn’t as fruitful as first hoped but enjoyable all the same. 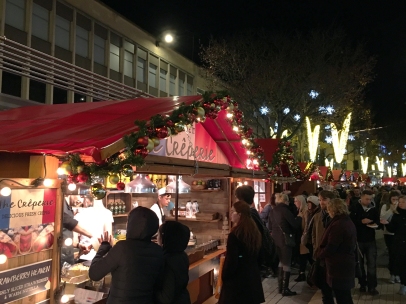 Bristol completely took me by surprise. Not in a good a way (to begin with) but never judge a book by its cover couldn’t apply more here. Theres lots to enjoy in Bristol even if your time is cut short by the British transport system. It’s evident the already popular city is on the up and I’ll be back for longer.